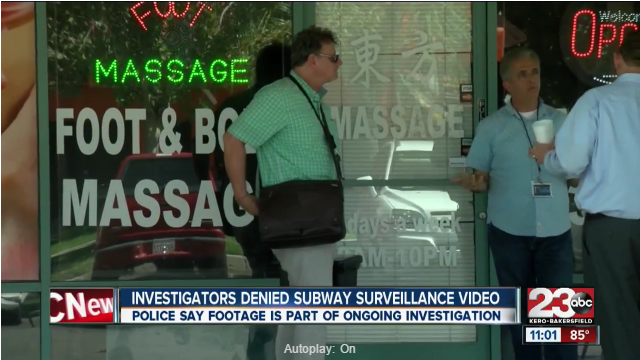 BAKERSFIELD. Calif. – It’s been five days since Jason Alderman was shot and killed by police Saturday night at a Subway restaurant in Oildale. As the investigation continues, the Alderman family is still trying to understand how that fateful night unfolded.

Police initially said surveillance video of the incident wasn’t available. But on Tuesday, BPD reported that Subway did in fact catch the incident on camera, and detectives have since seized the surveillance system as part of the investigation.

On Thursday, two private investigators went knocking on business doors trying to get their hands on any other surveillance video that may be available.

“After speaking with the owner Nick, he clearly indicated that after speaking with the police officers, Bakersfield Police Department took the DVR. “When I asked if he saw what it was showing he replied, Yes he did. But when I asked, ‘Can you tell us what did it show,’ he said he’d rather not,” said U.S.A. Legal Investigative Services, Harry Kazakian.

These investigators are working for the Los Angeles law firm Geragos & Geragos, who are representing the Alderman family.

They later headed to the police station trying to get a copy of the surveillance video – or just to take a look at the footage – but ended up leaving empty handed due to the investigative process.

“We don’t release information, we don’t release evidence in an ongoing criminal investigation,” said Sgt. Joe Grubbs with BPD, who added that proper procedure for anyone is to file a Freedom of Information Act request with the department, after which which the agency has 10 days to respond.

“Once that investigation is complete, that F.O.I.A. would be reviewed and a determination would be made at that point whether or not to release that information,” said Grubbs.

The investigator says filing the request will be their next step.

“That will be sent to the police station hoping that they will be very transparent in providing that information but I have a feeling it’s not going to be provided for quite some time,” said Kazakian.

Meanwhile, Grubbs said the department has been transparent throughout their investigation and are just doing their job.

“We have laid out the steps that have taken place in the investigation, given all of that to the public while still maintaining the investigation, while keeping it in tack, which is our requirement as a policing agency, that’s what we do,” said Grubbs.