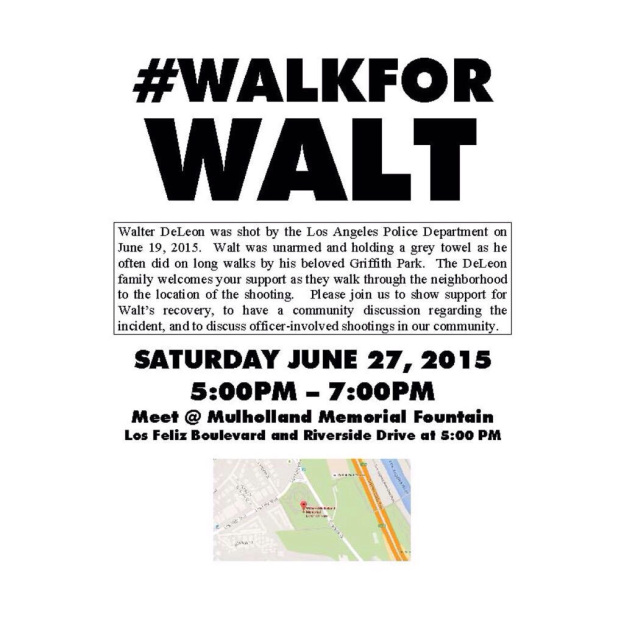 Earlier today, Saturday, June 27, I joined about 60 others for #WalkforWalt in honor of Walter DeLeon, the unarmed man shot by the LAPD last Friday.

Friends, family and neighbors met at the Mulholland Memorial Fountain at 5pm to talk about Mr. DeLeon, what exactly happened on that Friday evening, offer support to his family and talk to the media. The shooting hasn’t been getting much coverage by the news — local or otherwise — so it was nice to see that ABC 7, CBS 2, NBC4 and KCAL 9 all showed up to cover the event.

I had the opportunity to speak with Mr. DeLeon’s daughter, nephew and niece.

At around 6pm we started walking the half-mile stretch from the Fountain to where the shooting occurred on Los Feliz Boulevard and Tica Drive. Supporters of all ages carried gray towels in honor of Mr. DeLeon, who was carrying one the day he was shot (the two police officers believed he was hiding a weapon beneath the towel). A few held signs, one reading, ‘DID YOU SEE IT? EYEWITNESS?’#WalkforWalt Sign

When arriving on site, a candle was lit and flowers and the towels were laid down on the very spot Mr. DeLeon lied for 15 minutes before being loaded into an ambulance and taken to the hospital.

LAPD Shooting – Flowers, Candles, TowelsThe silence was only interrupted by the tears of the victim’s family and friends and occasional cars honking in support.

I offered his mother tissues to wipe away her tears, streaming down her face with no end in sight. It was the very least I could do.

Mr. DeLeon’s daughter Gisselle told me her father had started to move a bit, a good sign for his recovery. But all the family can do now is wait and see.

At 6:45pm, supporters held hands and recited the Lord’s Prayer:

Our Father, who art in Heaven,
Hallowed be thy Name,
Thy Kingdom come.
Thy will be done,
On earth as it is in heaven.
Give us this day our daily bread.
And forgive us our trespasses,
As we forgive those who trespass against us…

For more on #WalkforWalt, follow me on Twitter and visit the websites of CBS 2 and The Los Feliz Ledger.

If you have any information regarding the shooting, please contact the LAPD and the family’s private investigators Harry Kazakian at harry@usaexpressinc.com or Craig Nelson at cnelson@batza-associates.com.